. . . when something seems like a good idea at the the time & then you wonder what the hells you were thinking? Yeah. I managed to book myself in at two different schools today to do volunteer craft sessions. Thankfully, the schools are right across the road from each other 'cos I had to cart this little lot there this morning. 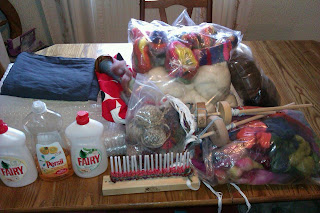 At one point I thought I was going to have to load the kids up like pack mules. First, I did two felt-making sessions this morning; 9am 'til 10:30am with the primary 1-2s & 10:45am 'til 12:15pm with the primary 3s. My hands are slathered in Neutrogena now & I'm hoping they stop stinging soon. Totally worth it though - look what the p1-2 class made. 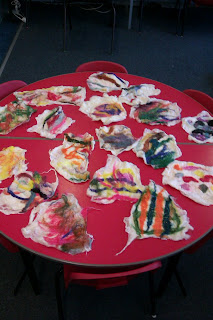 A quick detour to Tesco & a cheese & tomato sandwich later, I was in the second school for the last in my block of 5 textiles sessions. We'd already done paper weaving and felt-making & I had planned to take the spinning wheel in today but the rotten weather put paid to that - there's no way I'm taking my wheel out in the rain. Instead, we had a look at & a play with some different types of fibre; Lincoln longwool, merino, guanaco, alpaca, camel & yak. These were pronounced stinky but soft. Then we had a twiddle of some drop spindles, made pictures with some unspun fibre & had a go at weaving on the peg loom. 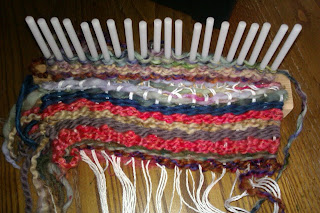 Not bad for an hour's work!
Posted by Shirley at 09:10 No comments:

So, my parcel arrived from World of Wool; 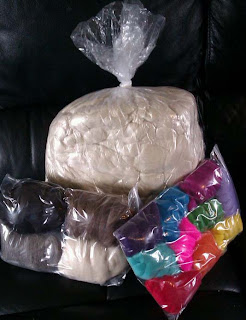 That's 250g of merino in 10 'brights' shades, 400g of shetland in 4 natural shades & 2.5KILOS of white merino. I opened that bag yesterday to get out 300g for the session I was doing & it just kind of exploded out of the bag. Trying to get it back in was like trying to close and over-stuffed suitcase, only I had no-one to sit on the lid while I closed the zip. I won in the end, but it was a close call. Anyway, the fibre was used in a felt-making session with some primary ones at school. It went really well & they loved the soapy, messy bit (unsurprisingly enough). Their current project is 'pets', so we've made the felt & the plan now is to cut it into shape & add googly eyes, ears, noses, tails & anything else no self-respecting pet should be without. Here's some of the finished felt, made by Rowan's class last week; 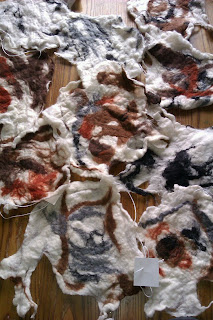 There's ten there & I have twelve more hanging to dry, plus twenty-one from yesterday's session still to be finished off, rinsed & tagged (have to make sure everyone gets their own piece back - they worked really hard on them). This should keep me busy for a while. Good job I have all my college work done. Before I go, here's one we made earlier; 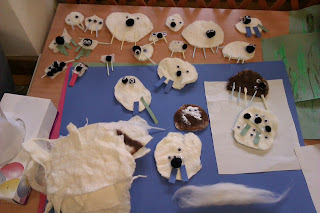 These are sheep, made by the nursery kids out of their very own hand-made felt.
Posted by Shirley at 08:37 No comments:

I mean really, seriously? No blog posts for the whole of 2011? I know I've been busy with family and college and miscellaneous other stuff but really, how could I have missed an entire YEAR? Closer to a year and a HALF, even! Oh well, now's as good a time as any to rectofy that, right? So, what have I been up to? Well, for most of the last year and a half I've been busy taking exams and writing essays, but all that is about to change because in a few weeks I should be a qualified early years worker, with an HNC and everything! Then I get to decide whether to go on and do my degree, like my tutor wants me to do, or get a job, like my husband wants me to do. But thankfully, I don't have to decide anything yet. On the crafting front, I haven't had an awful lot of time. I did publish a few patterns last year, most of them available on ravelry. There was Celtic Mittens, Peony Corsage, Midwinter's Eve neckwarmer and Weeping Angel Statue. In between times, I've been running spinning, weaving and felt-making sessions at a few local primary schools and nurseries and, the best bit, I taught Mhara to knit! 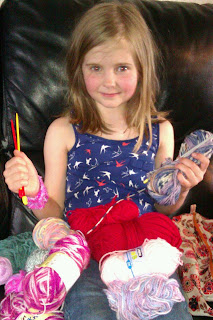 She's wearing her first-ever project, a garter stitch wristband, & showing off her stash, which is growing almost as fast as mine. I've also been trying my hand at needlework; 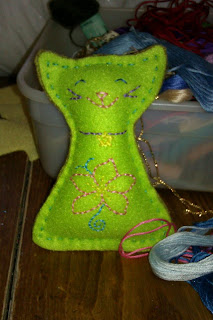 and really need to get my sewing machine serviced so I can tackle the FIVE sewing kits I just bought in a rav destash. Anyway, I really need to go stalk the postie just now since I'm waiting on a 3.1 KILOGRAM(!) order from World of Wool. Sadly, none of it is for me but for the felt-making sessions I'm doing over the next few weeks. At least Iain can't complain, since it won't be staying in the house long enough for him to trip over.
Posted by Shirley at 01:48 2 comments:

I have a new plaything.

Can you guess what it is? 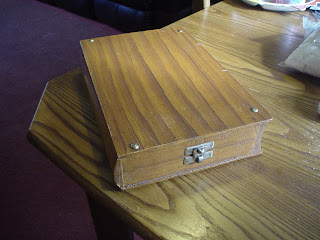 10 points to anyone who said 'book charkha - short fibres, for the spinning of'. Charkas are usually used to spin cotton but can also spin short-staple fine wools,silk, cashmere & quiviut - not that I'm likely to ever afford the latter.

It arrived today from loopfrogs, a fellow raveller & I had to have a wee play, despite there being dishes in the sink, laundry in the machine & who-knows-what all over the carpet.

My long-draw skillz are non-existent anyway & between that & the fact that I've never spun anything other than wool . . . 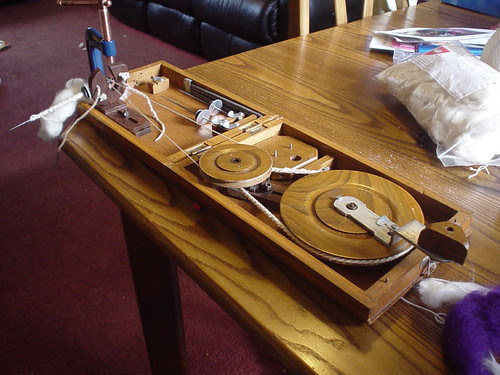 & a close-up of my lol-worthy spinning (see what I mean about the carpet?) - 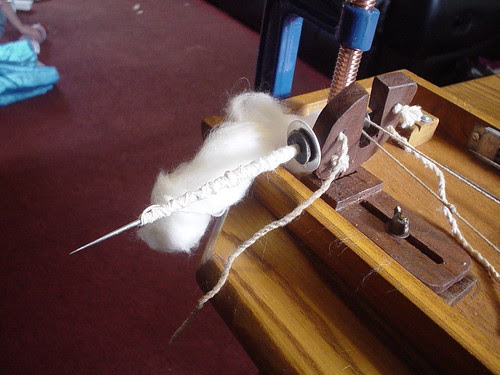 Still, like the song said things can only get better (or the charkha might get lobbed in the Forth but hopefully it won't come to that).
Posted by Shirley at 06:43 2 comments: 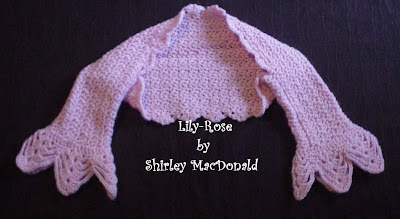 I wanted to make Mhara a shrug to keep her covered up at nursery since they're not allowed to play outside in the sun with bare shoulders. I had very definite ideas of how I wanted it to look - just covering the shoulders & with flared cuffs - & it turned out exactly as I pictured it. I was so chuffed I did a few sums & wrote it up for 3 different sizes, 2-4, 5-7 & 8-10 & it's now up for sale on ravelry & through my etsy shop. 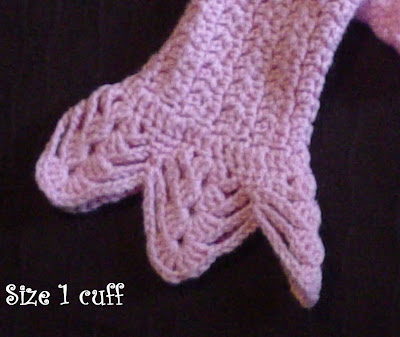 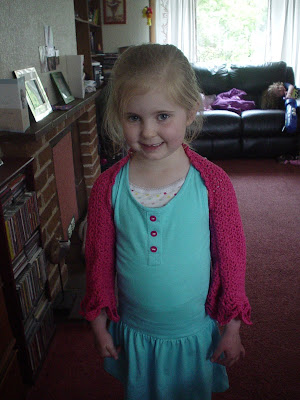 Not a lot to report today - hopefully tomorrow's scraps will be a bit more colourful :0D 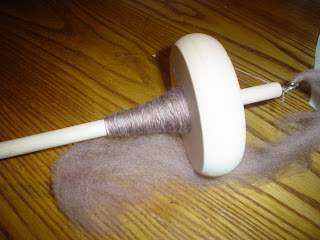 The spindle was getting heavy enough to break the yarn last night so this morning I wound off onto a spare bobbin (I intend to ply from the kate so will need the yarn on bobbins anyway for that). There was a lot more than I thought; tho' I've no idea what the yardage may be it took ages to wind off.

I decided to break out the mosaic-maker again for my end-of-week photo so without further ado, here it is. 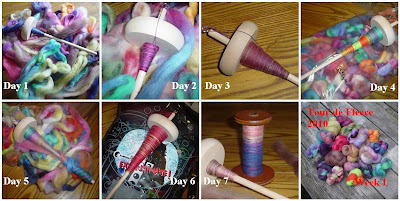 This isn't all the crafting I've been doing today but it is all I can show - for now ;0)
Posted by Shirley at 13:25 No comments: 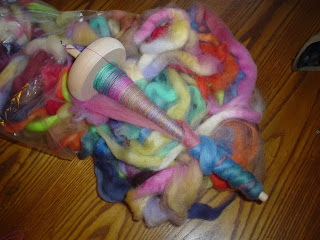 Back to muted colours. I'm missing the zingy citrus colours but I do have 700g of superwash merino fibre & lots of koolaid so I may be having a play with those once the tour is done :0D

No other crafting today, just lots of tidying. I do plan to head off to bed shortly with a cuppa & a crochet hook however . . .
Posted by Shirley at 13:19 No comments: 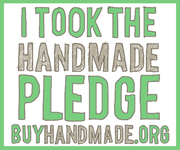