I can hardly believe I'm typing this - I was starting to think I'd never get this finished.

It all started last December when a few of us on Ravelry's Ankh-Morpork Knitters Guild were expressing our shock & disbelief at Terry Pratchett's Alzheimer's diagnosis. We wanted to do something to express our love for the Discworld & to let Terry know we we're thinking of him & being a fibre arts community I guess a group afghan was inevitable.

It was originally going to be 10 squares by 10 but with new people discovering the Guild there was always someone new asking to take part & it wound up 10 squares wide & 12 squares long. 97 crocheters & knitters from all around the world sent squares, some simple & some complex, to be sewn with love into the first ever Pratchgan.

Once the initial excitement of the project wore off I had a few sleepless nights, worrying that I'd mess it up or just plain wouldn't be able to do it & I hated to think of the disappointment all these fantastic people would feel if the project failed. Also a problem was the time - between the crafting & the admin (logging squares as they arrived, sending messages, chasing up people who had gone MIA) I reckon I've logged over 200 hours on this wee cracker. It took almost 20 hours to crochet the edging & hand-stitch the backing in place! I finally got to bed last night (this morning?) at 1:30am but I had the best sleep I've had in ages knowing it's finished.

It's all been worth it though. Whether the Pratchgan is handed in person to PTerry in person (please Gods) or sent in the mail, I'm just so happy to have been able to be a part of this fantastic project.

I'll add a couple of pics now but I hope to get better ones soon. I'll also be adding a list of everyone who took part, along with the grid reference of their squares. 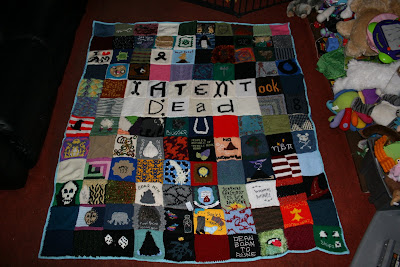 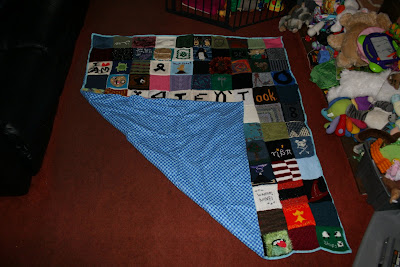 You are so totally, awesomely, fantastically wonderful! Thank you so much for making this beautiful object a reality.

Fantastic. You've done a wonderful job bringing all the pieces together and creating such a fantastic project. I'm so happy that I had a chance to take part in this!

Do you know Terry is at Edinburgh Book Festival tomorrow?

You have been so great through all of this! I don't think there's enough kudos on any world to show it! Roughly how much does the Pratchgan weigh?

I agree with lindsay and alce. They're able to say it better than me lol.

What great work! Thanks so much for doing this for us.